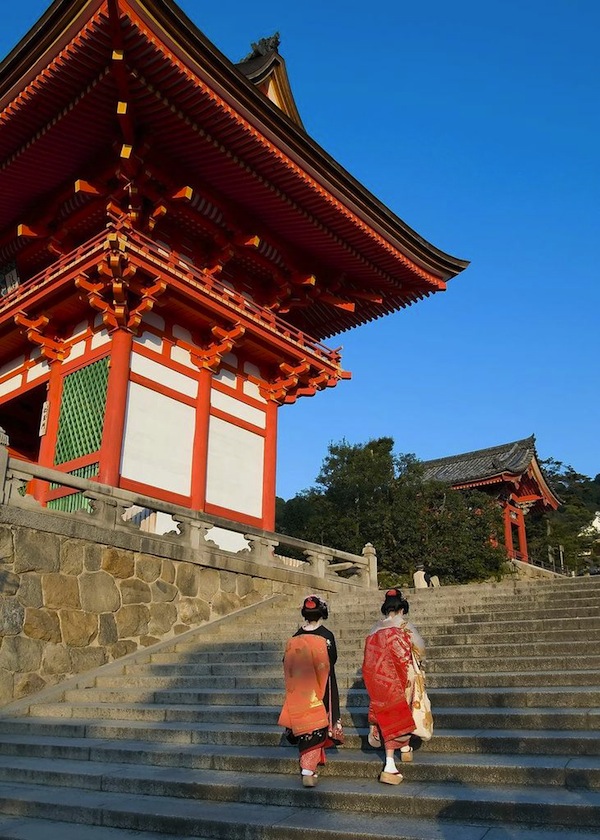 Miko’s costume consists of Byakue/ Hakui and Hibakama, and they generally wear white tabi and Zori as footwear, and wear a ponytail in the back of your head. It may vary a little between shrines, but they are mostly the same.

Byakui is explained as “white Kosode”, but it can be simply described as short white kimono.
When wearing, you do not pull the backside (emon), and let the front of your kimono overlap tightly up to your neck (don’t wear them loosely).

Hibakama means “hakama with the color Hiiro”, and Hiiro is a type of red color. They are generally Andonbakama which is easy to move along in your daily life, but when dancing Kagura-dance, Jouba-bakama (Horseriding -bakama) are sometimes worn to let your legs move freely. You don’t tie obi underneath, so the backside does not plump out that much. In formal places, you wear a jacket called Chihaya over these clothing. There is a similar thing called Suikan, but to explain it roughly, the front is open for Chihaya but closed for Suikan. It is defined that present Miko should wear Chihaya, but Suikan were also previously used, so if you are designing them for costumes, it is not a mistake to match Suikan with them.