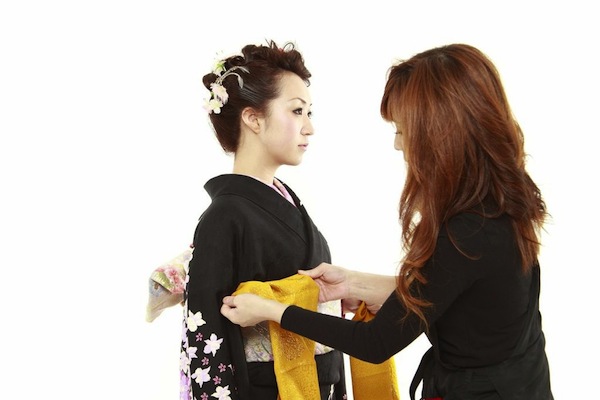 At the end of Heian period, pompous attires began to be in fashion among people in high position. And a special tequnique is needed to dress the attire beautifully. The technique is called “emondo”, and the person who dresses the attire on people with this technique is called “emonsha”. This emonsha is thought to be the beginning of kituskeshi. This profession was needed by only people of upper class in those days. In Edo period, however, when wide obi is getting popular among common people, kitsukeshi as the present days is said to have appeared. Kitsukeshi is not a recent profession but a profession from old days against our expectations. In most cases maiko of Kyoto is dressed by men kitsukeshi. This is because kimono of maiko is really gorgeous and heavy, and it needs power to dress it on her.